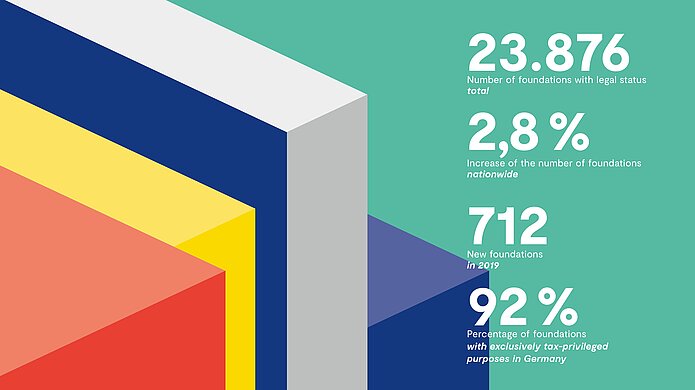 “The ongoing low-interest phase poses huge challenges for foundations. Nonetheless, the current figures show that it is still attractive to establish foundations – even during the coronavirus crisis. Anyone who sets up a foundation contributes to enriching and promoting social coexistence”, says Friederike v. Bünau, chair of the Association of German Foundations and director of the Foundation of the Protestant Church in Hesse and Nassau. “Foundations will have a positive influence on the future”, continues v. Bünau.

“Foundations are an important part of a strong civil society”, adds Kirsten Hommelhoff, secretary general of the Association of German Foundations. “This makes it all the more urgent for the draft bill to standardize foundation law to be passed before this legislative period ends. The reform would result in greater legal certainty for all foundations.” The Bundestag has been consulting on the planned reform of foundation law since mid-April. This would see the state-specific foundation law that has previously applied replaced by a uniform federal law, which would then be further developed.

At a glance: the federal states and cities

As per 31.12.2020, there were a total of 23,876 foundations with legal status according to civil law in Germany. 88.6 percent of these are based in the western states. In terms of the increase in the number of foundations, Hesse is the leading federal state, recording an increase of 8 percent compared to 2019, followed by Rhineland-Palatinate with 5.9 percent and Brandenburg with 4.9 percent. The highest number of foundations – that is 4,685 – is to be found in North Rhine-Westphalia. However, Hamburg remains the federal state with most foundations by the size of population: 78 foundations for every 100,000 inhabitants. The state with the lowest density of foundations is still Brandenburg with ten foundations per 100,000 inhabitants.