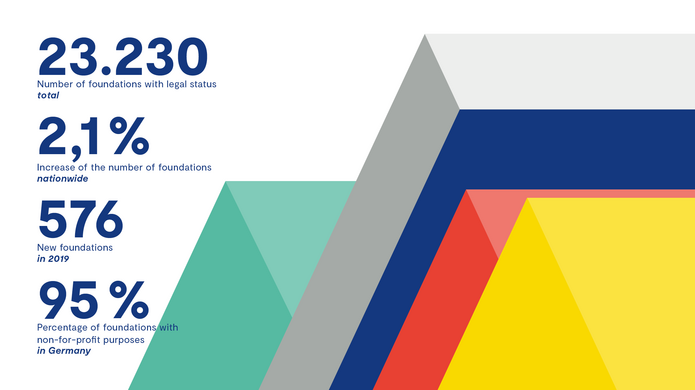 “Foundations stand together and thus demonstrate that they are a supporting pillar of our society, that they are essential for social cohesion.”
Prof. Joachim Rogall, Chairman of the Executive Board

Slight increase by 2.1 percent – constant growth of the foundation sector

“Those who set up a foundation are confident to be able to influence the future in a positive way. This attitude is encouraging, especially in the current situation. Foundations stand together and thus demonstrate that they are a supporting pillar of our society, that they are essential for social cohesion”, says Prof. Dr. Joachim Rogall, CEO of the Robert Bosch Foundation and chairman of the Association of German Foundations. “People can rely on foundations”, continues Rogall.

At a glance: the federal states and cities

In total, there are 23,230 foundations with legal status according to the Civil Law in Germany. 88.6 percent of these are based in the western states. On top of the list in terms of the increase of the number of foundations, though, are the states in the east of Germany. Saxony leads the list with 4.9 percent. The average increase in the new federal states is with 2.7 percent slightly above the average of the whole of Germany which is 2.1 percent. 80 of the 576 new foundations were established in East Germany including Berlin.

Taking a glance at the top 3 of the foundation capitals, Darmstadt is on course to the top of the list and will shortly be the German foundation capital. Würzburg is the only city to date that has even more foundations per 100,000 inhabitants. Oldenburg comes in third clearly after Darmstadt.