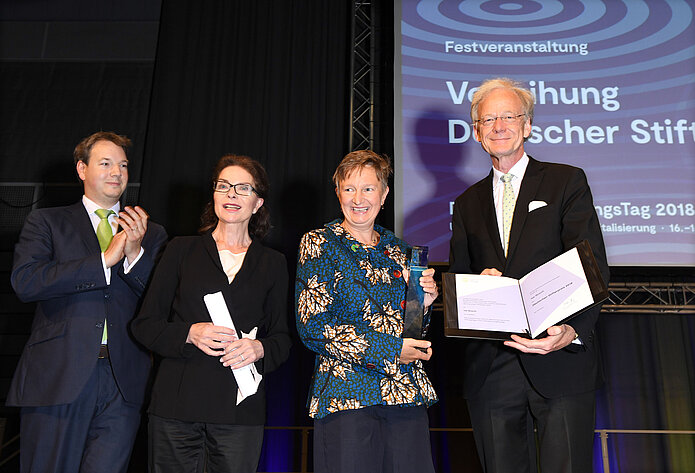 Nuremberg, 16 May 2018. “Ise Bosch is a woman who, in her commitments, does not decide or talk for and about others, but with them; who lets the people who are part of the issue at hand have their say. Today we are sending out a clear signal – by awarding the Female Founder’s Prize to Ise Bosch. It is going to a female philanthropist in the truest sense of the word: a female philanthropist who is concerned with change for people – who is concerned, not about them, but with them,“ said actress Gudrun Landgrebe in her laudation for the German Founder's Prize 2018. This was awarded to Ise Bosch today.

The Association of German Foundations honours the founder and donation activist for her many years of commitment to human rights, the improvement of the living conditions of girls and women, and the protection of sexual minorities. These are topics that have been the focus of Ise Bosch's engagement for more than 20 years, not just since the #metoo debate.

“I feel the prize is an outstretched hand. Not only for me, who is logically part of the German philanthropy scene, so to speak, but also for my topics: international commitment, human rights, and the topic of gender diversity,” said the prize winner Ise Bosch in her acceptance speech. And further:
“Many minorities are discriminated against, but in general it is considered that this is not ok. The right of sexual and sexual minorities to live normal lives is, however, repeatedly questioned. In most places in the world this means open hatred, constant stress, manhunt.”

Ise Bosch is committed to social change. In 1996, she became the founder of the International Fund for Sexual Minorities at the Astraea Lesbian Action Foundation, New York. In 2000, Ise Bosch founded the Pecunia Erbinnen-Netzwerk together with other heiresses. As a co-founder of filia.die frauenstiftung in Hamburg, Ise Bosch is committed to the participation and non-violent life of girls and women. Dreilinden Gesellschaft für gemeinnütziges Privatkapital mbH, which was founded by her, promotes the social acceptance of gender and sexual diversity. It implements this through project funding and social investment.

Ise Bosch is the granddaughter of Robert Bosch, founder of Robert Bosch GmbH and also a founder of a foundation. She sold her shares in her grandfather’s company to go her own philanthropic way. Through her book Donating Better, she has sought to motivate other wealthy people to give for social change and to find the right commitment strategy for them. In May 2018, Ise Bosch published her latest book Giving with Trust – How Philanthropy becomes Transformative in collaboration with Justus Eisfeld and Claudia Bollwinkel. In this book, they ask how money and the privileges associated with it can be used in such a way that far-reaching social change is possible, and how, even in the face of unequal power relations, people can work together more trustingly.

About the award ceremony

Around 2,000 guests, including luminaries such as Prof. Dr. Michael Göring, Chairman of the Board of the Association of German Foundations, and the Bavarian State Minister of Justice, Prof. Dr. Winfried Bausback, took part in the award ceremony in the Nuremberg Frankenhalle.

The German Founder’s Prize of the Association of German Foundations is considered the highest award in the field of foundations. The glass stele was awarded for the first time in 1994, and so far 19 times, most recently to Gabriele Quandt and Florian Langenscheidt, of the Polytechnische Gesellschaft Frankfurt am Main, and Jenny De la Torre Castro. The prize is not endowed.