Increase in new foundations testimony to strong commitment to society 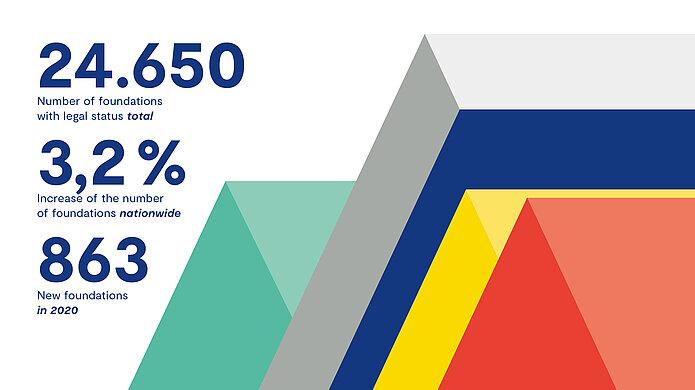 Kirsten Hommelhoff, secretary-general of the Association of German Foundations: “The German foundation sector saw renewed growth in 2021. 863 new foundations were established – the highest figure in ten years. We at the Association of German Foundations are particularly pleased when people set up foundations with a view to committing themselves to our society long-term. Ever since the war in Ukraine broke out we have been witnessing precisely this kind of great commitment. German foundations reacted quickly and vigorously, providing people in Ukraine with effective and uncomplicated assistance – both at the local level and here in Germany. They have demonstrated that they can make our society better and more humane.”

A glance at Germany’s federal states

As per 31.12.2021, there were a total of 24,650 foundations with legal status according to civil law in Germany. 88.6 percent of these are based in the country’s western states. In terms of the increase in the number of foundations, Hesse is the leading federal state at 9.9 percent, followed by Brandenburg with 7.8 percent and Rhineland-Palatinate with 6.0 percent.

"We are particularly pleased when people set up foundations with a view to committing themselves to our society long-term."
Kirsten Hommelhoff, secretary-general of the Association of German Foundations

Examples of new foundations set up in 2021

Stadtbodenstiftung, Berlin: The Stadtbodenstiftung has chosen “Via land to a solidarity-based city” as its motto. It sees itself as a civic foundation that is committed to a socially just, discrimination-free and ecological city. This is to be achieved primarily through the fiduciary management of land and the allocation of heritable building rights to non-profit-oriented actors.
www.stadtbodenstiftung.de

MONOM Stiftung für Veränderung, Leipzig: The MONOM Stiftung funds, supports and advises individuals and initiatives that are committed to fighting existing instances of discrimination – such as racism, anti-Semitism and sexism – or to studying National Socialism. The foundation’s aim is to encourage critical engagement with society with a view to promoting the emancipatory idea of equality for all.
www.monom-stiftung.org

Kulturlabor – Stiftung zur Förderung von Kunst & Kultur, Sulz am Neckar: The Kulturlabor (cultural laboratory) wants to promote the development of a diverse cultural landscape in which different voices can find an audience, tolerance and an understanding of democracy are fostered, and a sustainable attitude is encouraged in all areas of life. The foundation funds engaged and creative individuals, as well as art and culture projects, especially those in rural regions.
www.kulturlabor-stiftung.de

Stiftung Cultopia, Cologne: The foundation’s Art Café aims to provide people who have a physical, mental or social disability (e.g. a lack of educational qualifications) with an apprenticeship in an inclusive company, thereby giving them professional prospects. Another Cultopia project is an art and cultural centre with a benefit gallery, events and a small private museum focusing on the issues of poverty, homelessness and social deprivation. In addition, the foundation is keen to roll out its flagship “CASA COLONIA” project to help poor, marginalized and homeless people and refugees.
www.cultopia-stiftung.koeln