Public Crowdfunding in the Jewish district in Budapest 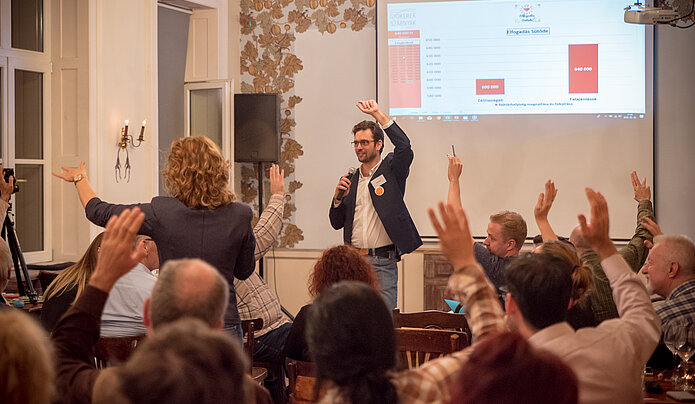 Target met. The Hungarian foundation Gyökerek és Szárnyák Alapítvány has organized public crowdfunding events for a year and a half. In May 2019, three projects met their funding targets and thus the association Parola (handshake), families in need, and a bakery run by Roma women received funding.

The Hungarian foundation Gyökerek és Szárnyák Alapítvány (Roots & Wings) in Budapest is the responsible body for three major projects: KözösALAPON („on a joint basis“) that consults and supports the establishment of community foundations in Hungary, Kisvárosok („small towns“) that supports actors in the non-profit sector in rural areas, and last but not least Elö Adás, in Hungarian a pun that means both live broadcast as well as live donation. Elö Adás is a kind of public crowdfunding, an event with a big group of generous people on an analogue and not a virtual public platform.

The event takes place in a homely saloon on the first floor of the Jewish restaurant Köleves („soup of stones“, referring to a well-known fairy tale) in the centre of the old Jewish district in Pest. While noisy tourists pass below on the street, on the first floor, after a delicious buffet, donations for the common good are collected. The audience is diverse and seems surprisingly normal: women and men of different age groups and styles, all very casual. The rules are simple: three social projects present themselves, pitch their objectives to the audience, for what they need how much money; the guests can ask questions to the activists.

On this evening, three very different projects apply for funds: the association Parola („handshake“) supports projects that build communities, it edits a newspaper whose web presence they want to relaunch. The Fönix Movement „Be there“ collects donations to provide learning material for kids of families with financial constraints. And Elfogasás Sütöde („acceptance bakery“) in Monor, a small community southeast of Budapest, is run by Roma women who support several families.

The pitch of the projects is limited in time: the speakers are well prepared and present their project in five minutes. The well-meaning guests ask some questions that the speakers answer in detail. After this first part, the project managers have to leave the room and wait patiently – only towards the end of the evening they are allowed back in to find out about the results.

In the meantime, the target amount is projected on a big screen. Then the guests start donating: In the first round, for one project after the other, people offer at least 10,000 HUF (approx. 30 Euros) by raising their hand and the sum is announced together with the name of the donor. Name and sum are registered. The collected amount increases slowly yet steadily. If the audience seems to become weary, somebody again raises his or her hand to revive the drive. Or the well-versed moderator motivates the audience with encouraging comments or complementary questions to knowledgeable guests. The audience turns out to be well-intentioned and creative. One bid goes: „I’ll give 30,000 HUF if another three donors who love to eat cake give 10,000 HUF each.“ – obviously for the bakery project, and quickly those three persons contribute their share.

In the second round, three volunteers of the three projects explain in only one minute each why they consider the respective project worth supporting. From now on, also less than 10,000 HUF can be donated as well as contributions in kind or monetary benefits: „A weekend for up to 10 people in my holiday home“, „an article in the newspaper for which I write“, „a coffee machine for the project“ etc.

Finally, all three projects have reached or even exceeded their target amount. More than 6,000 Euros have been donated, approximately 2,000 Euros per project. This breaks down to about 60 Euros per guest, not a small amount in a country where the average salary is 953 Euros (2019) while in Germany, it is 3,224 Euros.

In the end, the project managers were invited back in, the columns with the final sums are faded in and result in unbelieving wonder, tears, and hugs. The moderator asks the supporters of every project to get up so that the project managers can see them: a moving moment because many people have donated for all three projects. Near the exit, the promised cash or the written declarations for the bank transfer fill a big box. A few days later, an email will arrive soliciting the amount. It is a format that impresses through its efficiency, the goodwill, and the sense for the community.

The British organization The Funding Network has put this method into practice since 2002 with varying partners. They consult those who are interested in using it and have accompanied the Hungarian foundation Roots & Wings for more than a year to carry out their version.

And what is behind the numbers:

Tears of joy, handshakes, smiles, and hugs. Solidarity, faith, support, spiritual ammunition, COMMUNITY. Thanks to everybody.

All articles of Axel Halling
To top