When is your foundation's overshoot day? 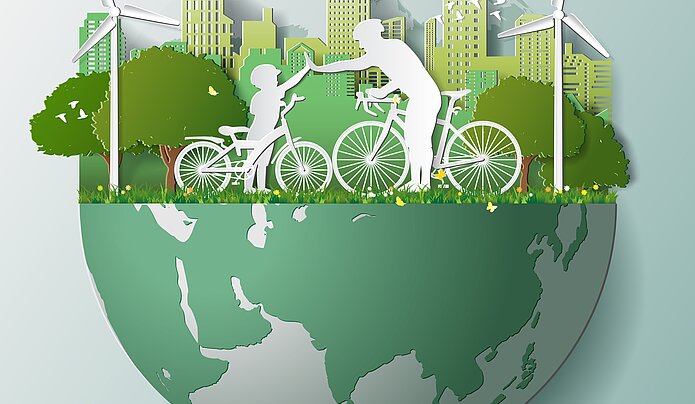 News
© SceneNature/Shutterstock.com
Back to overview

Plastic waste in the oceans, micro plastics in the food chain, insect and birth deaths – these are just three of the many cross-border aspects in the area of environmental problems that we encounter almost every day in the media. For many people in Germany – and according to a 2006 Shell Study, especially for youth – it is important to be as environmentally conscious as possible. At the same time, we are also aware of how difficult it is to reduce our so-called “ecological footprint”. The annual Earth Overshoot Day  was therefore launched by the Global Footprint Network as a reminder, to mark the day of the current year when our demand for natural resources consumed the amount the Earth needs to reproduce these resources. In 2017, at a global level this day was 2 August, but in Germany it was a 24 April. Other countries had their national overshoot day much later: for example, for Ghana it was 21 November and for Honduras it was 31 December.

Have foundations lost in the fight against climate change?

Achieving a fundamental improvement and maintaining a future worth living for our descendants needs courageous and transformative steps, as is also required by the approach of the 2030 Agenda for sustainable development. Thus, all actors – politicians, business, civil society, citizens – need to actively participate in this, and so do foundations. A recent contribution to the discussion in The Chronicle of Philanthropy has said that foundations have lost the fight against climate change. The author had come to the conclusion that American foundations had invested millions of US dollars, but US climate policy was further away from successfully curbing climate change than it was 10 years ago and greenhouse gas emissions were set to increase on a global scale. Overall, it was mentioned by the author, foundations and non-profit organisations in the USA have not succeeded in creating a broad political movement for climate action. Numerous letters to the editor refuted these arguments in detail and emphasised the important contributions of the American foundation and philanthropy sector.

Role of German foundations in relation to sustainable development

What about German foundations? They do valuable and meaningful work for sustainable development worldwide on a cross-border and global level. For example, German foundations were the initiators of Foundations 20 (F20) in the run-up to the G20 Summit in Hamburg in 2017. More than 45 German and international foundations and philanthropy organisations belong to this platform. F20’s aim is to support the implementation of the United Nations’ 2030 Agenda and the climate treaties, and to promote joint and transnational action based on positive examples of transformation, with a focus on the G20 states and beyond. In addition, many individual foundations contribute their experience to other countries. For example, in 2018 the Heinz Sielmann Foundation is starting initiatives and nature conservation projects with partners in Ethiopia and Uganda, to support the conservation of animal and plant species there. The EuroNatur Foundation is active across borders in Europe in many ways: for example, in the initiatives to protect primeval forests in Romania, or to promote wild, original rivers.

From ecological footprint to sustainable handprint

What about development cooperation organisations? Here, too, there are many important and fundamental contributions. One example is the Deutsche Gesellschaft für Internationale Zusammenarbeit (GIZ) GmbH, which carries out important projects in the fields of environment and climate, together with partners in the respective countries. GIZ also attaches great importance to corporate sustainability in all it locations – in Germany and worldwide. For this purpose, it utilises the Corporate Sustainability Handprint® (CSH), which, on the one hand, enables the sustainability status achieved to be recorded efficiently and systematically, and, on the other hand, is an instrument with which the sustainability profile of sites can be further developed.

In order to maintain a future worth living for our descendants, we need to take the courageous and transformative steps already mentioned – in projects, investments and the sustainability concept in our own organisation. Write to us and share your experiences with us and with other foundations, so that we can continue to move forward together.

I will calculate my personal overshoot day now. Do you know yours, and that of your foundation?

How big is your environmental footprint?