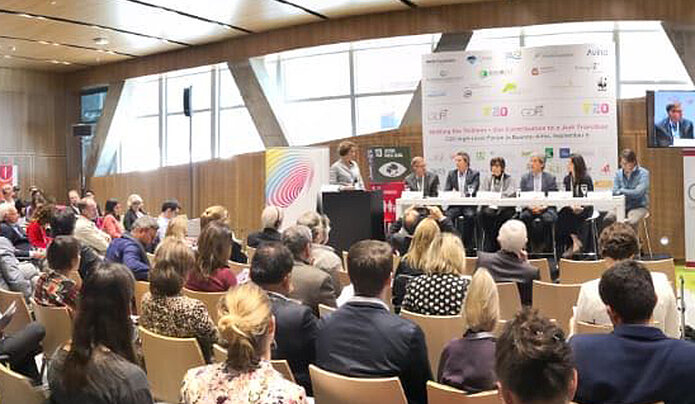 Inspired, enthusiastic and worth every minute: that was the unanimous response of the participants of the strategic meeting held by the G20 Foundations 20 (F20) foundation platform in Mendoza (Argentina) from 7 to 9 September 2018.

The meeting brought together F20 members and other foundations with an interest in international philanthropy foundations from six G20 countries (Argentina, Brazil, Germany, Japan, South Africa, and the United States) to plan the future of the foundation platform and activities related to the G20 summits to be held in Argentina and Japan, and also the summit in Saudi Arabia planned for 2020.

How can foundations contribute to the Paris climate agreement?

The discussions were characterised by the desire to work together to achieve more for the implementation of the Paris Climate Agreement and the Sustainable Development Goals (SDGs) of the United Nations. It quickly became clear that the foundations present were heralding a new phase of F20 work – a phase of even broader, more agile, cross-border cooperation between foundations and philanthropic organisations of different sizes and approaches. At the forefront of the joint discussions was the potential to jointly address challenges and explore new avenues to vigorously and successfully implement the Paris Climate Change Convention and the United Nations' 2030 agenda.

"As foundations, we not only want to direct our expectations towards politics, but also to be part of the solution ourselves, through a new transformative cooperation. We want to inspire and encourage!"

The meeting was preceded by the F20’s second high-level forum "Shifting the Trillions – Our Contribution to a Just Change" in Buenos Aires on 6 September. The aim of the forum was to raise awareness among participants of the G20 meeting and the public of the urgent need for the G20 countries to deliver the objectives of the Paris Climate Agreement, which is a prerequisite for sustainable and resilient societies, and which we are still far from achieving. F20 had also published a statement on this in advance.

The event was opened by prominent advocates for respecting the planet's limits and for sustainable development, and was attended by over 200 participants. Rabbi Sergio Bergmann, Minister of Environment and Sustainable Development of Argentina, and Maria Julia Diaz Ardaya, President of the Argentine Group of Foundations and Enterprises (GDFE), were among the participants.

"Truly ethical leadership means taking tough decisions in the knowledge that the benefits may not be truly felt until many years after the end of our lifetime. But this is our collective human and planetary responsibility."

Ricardo Lagos, member of the Elders Foundation and former President of Chile, gave an inspiring opening speech in which he stressed that we can no longer measure the progress of countries on the basis of gross national product. Instead, we need to develop a different definition of profit and growth that takes into account the aspects of sustainable development and decarbonisation.

During the meeting, the costs of a just transformation, the importance of renewable energy and various recommendations to be made to the G20 heads of state were discussed. The representatives of the foundations in attendance clearly advocated that foundations and philanthropists should make a special effort to implement the Paris Climate Agreement and the 2030 Agenda.

"Everything we care about – SDG 1 through SDG 17 – is dependent upon a safe and healthy planet. And for that we must achieve the goal of staying below 1.5C in global average temperature rise. This is both possible and necessary. We should eliminate ‘2C’ f

F20 is a network of international foundations and philanthropists. They focuses on dialogue and cooperation between national and international foundations. Since its founding in 2017, around 50 foundations from various parts of the world, including organisations from Asia, Africa, Australia, Europe, Canada, Latin America and the USA, have joined the platform. All partners of the F20 platform are aware of their global responsibilities and take a clear position in this regard by focusing on the 2030 Agenda and the Paris Climate Agreement 2015 within the political discourse of the G20 process and beyond.