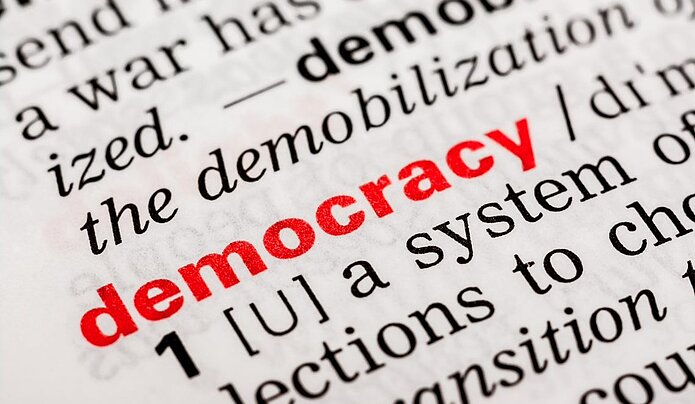 News
© Radu Bercan/Shutterstock.com
Back to overview

Democracy – Should we be allowed to interfere in the political processes of other countries? This is a question that is asked again and again, and that has many different facets. The issue relates not only to the promotion of democracy itself, but also to the possible consequences of democracy promotion activities that people and organisations that are supported may experience – or that the organisations doing the supporting in Germany may experience.

In discussions on the topic of democracy and international cooperation, critics often comment on whether the respective programmes are an intervention in the political processes of another country, or whether conditionalities for development cooperation could or should exist. It is also an important question for German foundations whether and how they can or want to contribute to the promotion of democracy in their international work.

In this context, it is interesting to take a closer look at the approach of the 2030 Agenda for Sustainable Development, adopted by 193 nations in September 2015, with its 17 objectives and 169 sub-objectives. Under this Agenda, the global community has the overall task of rethinking sustainable development and cooperation, which also has an impact on international democracy promotion. The fundamental transformation demanded – and that is also necessary – by the Agenda affects all countries, i.e. there is no longer the division into so-called developed and less developed states; this transformation can only be achieved on the basis of partnerships at all levels. Ultimately, it is about achieving sustainable development for all and about leaving no one behind.

Democracy in the 2030 Agenda

The word “democracy” appears only once in the resolution that adopted the 2030 Agenda – where the United Nations represents its vision for the future: “One [world] in which democracy, good governance and the rule of law, as well as an enabling environment at the national and international levels, are essential for sustainable development, including sustained and inclusive economic growth, social development, environmental protection and the eradication of poverty and hunger.”

Although Objective 16 of the 2030 Agenda does not mention the word “democracy”, it deals directly with the elements addressed in the vision on democracy: “Promote peaceful and inclusive societies for sustainable development, provide access to justice for all and build effective, accountable and inclusive institutions at all levels.” This also includes important issues, such as reducing corruption, bribery and illegal financial and arms flows, combating terrorism and organised crime, and also granting access to public information and protecting fundamental freedoms as enshrined in national legislation and international agreements.

Ban Ki-moon, Secretary-General of the United Nations from 2007 to 2016, also clearly underlined the essential importance of democracy and Goal 16 for sustainable development. In addition, he emphasised: “Democratic principles run through the Agenda like a golden thread, from universal access to public goods, health care and education, as well as safe places to live and decent work opportunities for all.” This also addresses another important principle of the 2030 Agenda: the desired sustainable development can only be achieved through the implementation and interaction of all of the objectives together. They are interconnected, integrative and mutually supportive – and if the implementation of one or more goals is neglected or there are problems with them, the objectives will hinder each other.

In German international cooperation, democratic forms of government are regarded as essential for the success of sustainable development. Strengthening democracy is therefore an important area of German development cooperation. At the Federal Ministry for Economic Cooperation and Development (BMZ), for example, this includes support for political reform processes, good governance, the rule of law, general human rights and freedom of opinion and of the press, as well as involvement related to democracy in fragile states.

This topic is also important for the implementing organisations of German international cooperation. The Deutsche Gesellschaft für Internationale Zusammenarbeit (GIZ) GmbH, for example, cites “State and Democracy” as its specialist expertise. This includes numerous programmes on democracy and the rule of law (e.g. promotion of democracy, poverty-oriented governance, combating corruption, human rights, law and justice), but also urban development and decentralisation, as well as public finances.

The promotion of democracy is an important, multi-faceted and broad topic. In addition to the aspects considered above, all participants – not least, those in foundations – must find answers to the following questions: How can partnerships and synergies between the individual actors – both in Germany and internationally – achieve even greater impact in the field of democracy promotion? How can they better exchange ideas and learn from each other? How can German foundations also have an impact in Germany – e.g. in the areas of human rights or combating corruption – and thus strengthen democracy? How can democracy be promoted and civil society on the ground supported, especially in countries where we observe the phenomenon of shrinking space for civil society or even civil society space being closed down?

The topic of democracy is an important issue in the 2030 Agenda for Sustainable Development adopted by the United Nations in September 2015 – although the word itself is used only once in the Agenda. German international cooperation and many foundations are also working on this issue. The next German Foundation Day in Mannheim in June 2019 will offer the opportunity to discuss important aspects of national and international democracy promotion.

This article was published first in the magazine “Stiftung & Sponsoring”, edition 5/2018.