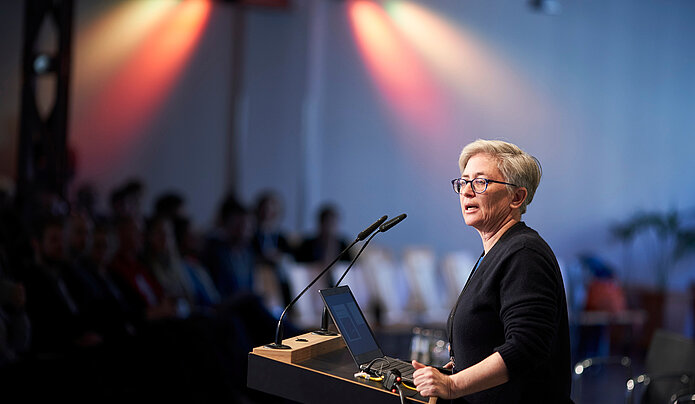 Digital transformation has profound effects on civil society. In this interview, Lucy Bernholz, a researcher at Stanford University Center on Philanthropy and Civil Society, addresses consequences for foundations. She points out that democracy will not benefit civil society unless digitisation empowers civic players to become powerful counterparts to the state and the private sector.

What does digital civil society mean to you?
The definition we usually use is all the ways that we voluntarily use private resources for public benefit in the digital age. What’s important is that this includes at least one new resource, which we didn’t use in analogue civil societies. If you think of analogue civil societies being where we donate time or money, now the focus is data. Data is a fundamentally different thing. It just doesn’t work the way time or money does. It’s a different kind of resource. It’s like we have moved from land to water, but we have just taken our house, put it on pontoons and set it out to sea. Now it’s time we actually start building some boats as opposed to just moving the house.

Why is it such a big deal to move from analogue civil society to digital civil society for foundations?
It’s about the nature of digital transformation. When I talk to foundations, I point out to them that they only exist because of the nature of money. There wouldn’t be foundations if money didn’t work the way it works. If we all had the money, we wouldn’t have foundations. Or if money were held in common, we wouldn’t have foundations. Philanthropy is built on “I have it and you don’t. You convince me and then I’ll give it to you. And then you have it and I don’t.” But data just doesn’t work that way. That alone, to my mind, is big enough. But there are other things that are fundamentally different too.

What are these other things?
Primarily, the nature of our dependence on commercial software and hardware that are also government surveilled. The idea that there is an independent space, that there is any kind of private space for you and me or two foundations or two neighbours to get together to make a decision to do something that’s not necessarily being provided by the market or by the government. We cannot do that in the digital space, because that conversation – once it has happened digitally, then there are all these other people who have access to it and it lives on in their world. We don’t have any awareness of that. For so many of us this seems like an abstraction. And what harm comes from that?

This relates to the private sphere, does it?
What we are watching in the way the world of work is changing, the way education is changing, the way healthcare is changing and the way democracies are changing, part of that – not all of it, but part of that – is because there actually isn’t a way to privately associate for public benefit using these tools. It’s just not private anymore. The first people to really understand this are the most vulnerable, or groups that have always been surveilled by governments. For example African-Americans in my country, they get this. Our government has been surveilling them forever. We have been discriminating against them since the country was founded. They can understand the nature of surveillance and discrimination. And now, it has just moved into a digital realm. This means that it’s not just a government issue, but is also a corporate issue.

This, however, does not sound like a transparent, fair and just approach…
We need to demand – literally call for – and support the creation of Open Source technology that people can use. But it’s just not that simple, because Open Source doesn’t have the marketing budget of big companies and it’s not sexy and it’s not addictive. It takes learning. And it’s hard to move all your data from Slack or SalesForce over to something else.

Some people argue that society can become more democratic due to digitalisation. What’s your point of view?
I have a one-word answer: No. It’s a complete farce. Not in the current political economy. The current political economy of digital is one of corporate capture. We are in an age of digital corporate capture. There is very little that’s democratising about what’s going on here. We have simply switched out one set of gatekeepers for another. Now, could society in general become more democratic due to digitalisation? Yes. But, it is not going to happen if we keep going the way we are going.

Which role can foundations play to ensure that digitalisation benefits civil society?
First and foremost, they need to understand the nature of data and really think about how it works. They also need to stop demanding data from their non-profits. That’s just putting the people they serve in danger. They need to really think about it – just as foundations have careful processes for contracting for money, they need to think about the parallel process for the data that they are going to ask for from the non-profits. If they are asking these organisations to collect a whole bunch of data that they are actually not going to use, they should replace the word “data” with “a person” and realise that they are making these organisations collect information on people. They are actually making those people more vulnerable. So, there is a huge role for foundations to play: they could also invest in a kind of understanding about the data that their non-profits need. If they are already investing in what in the US is called organisational capacity or organisational effectiveness, there is no such thing as organisational effectiveness in 2019 without some degree of digital data governance. And for them to keep moving past that is just a farce.

This doesn`t sound very optimistic…
Well it’s just frustrating that foundations are as quick as the next organisation to buy these tools without really pausing to investigate them. Even if they do pause to investigate them for their own purposes, they are still putting their grantees in compromised positions.

But – here is another thing foundations can do: particularly foundations in the EU which spend a whole lot of money complying with the GDPR (General Data Protection Regulation): The big foundations have lawyers, they have professional management , etc. so why don’t they help the non-profits figure out how to do that instead of expecting them to be able to when we know they don’t have the resources to do it?

Lucy Bernholz is Senior Research Scholar at Stanford University Center on Philanthropy and Civil Society, where she heads the Digital Civil Society Lab. She researches the intersection of philanthropy, (digital) technologies and civil society. She is the publisher of the BLUEPRINT. Philanthropy and Social Investing“ magazine, in which analyses the influence of digital technologies on the civic sector. The current focuses of Bernholz are digital dependencies and data politics.

What’s next in the foundation and philanthropy sector?

Get the latest news directly on your Smartphone!