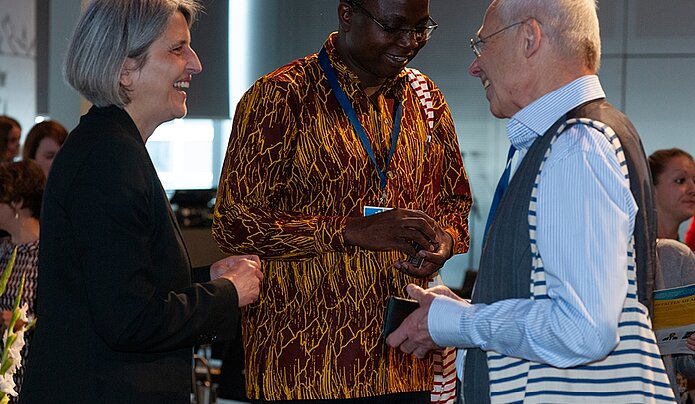 Annette, last year you told us about your joy about the many activities ahead of you. How are you feeling now?
In many respects it actually turned out as good as I expected: the Mission Investing Forum, jointly organised by GLS Bank and the Association of German Foundations, and the Africa Workshop in January 2019 were the next steps towards more intensive cooperation with African partners, and we were able to move on to the 2030 Agenda with the 17 sustainability goals, such as the Partner for Review network meetings [note for the Newsroom: please take the link to the English version once it is uploaded] in Berlin and Mexico. Of course, it was also great that we were able to organise panels on “Our Biggest Failures in Africa” and “Democracy and the SDGs” at the German Foundation Day 2019 in Mannheim, where experts from Hungary, the UK and South Africa were present, in addition to German foundation representatives. And then, of course, a lot happened in the Next Philanthropy Initiative, such as interviews with James Alexander, Director of the Future Agenda Team, and Benjamin Bellegy, Executive Director of the Worldwide Initiatives for Grantmakers Support (WINGS), and the attempt to establish the daily Push News about Next Philanthropy über WhatsApp.

What do you think needs to improve or increase?
Looking back on the experiences of the last two years, I think that more opportunities for exchange and dialogue around the themes of the 17 sustainability goals and the cooperation of the various actors would be important, to realise the transformative character of the 2030 Agenda. We often talk about the transformation needed to achieve the sustainability goals, but words are not followed by deeds. We still think and move far too much within the framework of what we are used to.

What would it take to get beyond business as usual?
It takes a lot, because it requires us to be prepared to completely reexamine our approach and to ask what the approaches might be that will secure us a sustainable, common future. A first step is to get involved with new conversation partners and listen to them with interest. When I go to meetings or events, I usually meet the same people. We know each other and enjoy the opportunity to meet again and exchange ideas, which is good. But I think it’s important to take a closer look: do we have all the relevant stakeholders in the room? How would it be if we had others in the room who question our views or bring completely new perspectives to them? People who look at a topic through completely different experiences, who don’t have the same frame of reference and use language, words and gestures differently.

Why, do you think, doesn’t this happen more often?
One factor is certainly time. In many cases we are still stuck in a crowded daily routine or schedule, which leaves little time to really break new ground. Then there are always requirements as to how successful meetings and events should be. To dare something new is a risk that one cannot always take. And we often lack the contacts to the people we would actually like to invite, or the knowledge that they exist.

How can one make such contacts?
On the one hand, the issue is the view we have of the topics we are currently working on. It is an important step to look again and again at how we can bring in the most diverse facets, because it often allows us to see which people are working on this topic or are affected and involved. To expand our own network is a further step. But I also consider it important to, again and again, keep in mind the conflict between the goals of doing more and having time – for listening, for conversations, for reflection, etc. This also means, for example, that we have to reconsider business trips, especially their frequency and length. How often do you take short business trips in which you scurry quickly from A to B, often by plane? After my experiences this year, I have decided to be more selective when it comes to business trips – what is really needed and how can trips be much more sustainable with regard to climate change?

But doesn‘t that mean less contact with people you wouldn’t otherwise meet?
Not necessarily. I think here we can once more fundamentally rethink forms of exchange and dialogue. Personal encounters will always be important, but are we making sufficient use of the possibilities offered by digitalisation? At the Africa Workshop in January 2019, jointly organised by the Robert Bosch Stiftung and the Association of German Foundations, for example, the idea of a digital platform where people can exchange ideas on solutions for sustainability goals was presented. This was done in the hope of creating access for people who would otherwise be unable to attend larger meetings or travel to events. This idea is currently being carried forward and I am curious as to whether it will materialise. Another way is to think much more in terms of networks: then you don’t have to be present everywhere yourself.

The pilot you‘re working on runs until the end of the year. How will you use the time?
The three major thematic blocks to which I was able to contribute in the Association of German Foundations were Next Philanthropy, the contribution of philanthropy to the sustainability goals, and the development of new partnership approaches in cooperation with Africa. I hope that over the next few months I will be able to bring everything I have worked on to the point where it can be continued in the Association of German Foundations later on, or lead to the next steps. An extension of the pilot measure is currently also being discussed. That would of course be great, because then there would be more time to anchor the work sustainably, because two and a half years is a very short period of time for a new pilot measure.

EZ-Scout of the Deutsche Gesellschaft für Internationale Zusammenarbeit (GIZ) GmbH on behalf of the Federal Ministry for Economic Cooperation and Development (BMZ) seconded to the Association of German Foundations.

The SDGs are our yardstick

Michael Beier, Chairman of the of the Heinz Sielmann Foundation talks about Fridays for Future and the importance of foundations for fighting climate change.

Change in the management of the Association of German Foundations

Secretary General Felix Oldenburg has announced he will resign from his role in March 2020. He will continue as chair of Donors and Foundations Networks in Europe (DAFNE) until January 2021.